A brilliant man who had been prevented from gaining an education while in slavery, Henry Bibb learned to read and write as an adult. He became an anti-slavery lecturer based in Detroit, Michigan, and met Mary Elizabeth Miles while on a speaking tour. She was a free woman born in Rhode Island. She had been trained as a school teacher, and was very involved in the anti-slavery cause. Henry and Mary Miles married in 1847, and began a life together in Michigan.
Henry Bibb became an eloquent lecturer, author and community organizer. His autobiography, Narrative of the Life and Adventures of Henry Bibb, An American Slave publicized the horrors of slavery. It was published in 1849 and became very popular reading, helping to further the cause of anti-slavery in North America and even in Europe.
In 1850, the US Congress passed a new law, The Fugitive Slave Act. It gave greatly enhanced powers to slaveholders, so they could recover "servants" who had escaped to the Northern US. This made it far too dangerous for Henry to stay in Detroit, so he and his wife, Mary, moved to Sandwich, Canada West (Windsor, Ontario). They founded a school for Black children, who were not allowed to go to the public schools with white children because of racism. The school was taught by Mary Bibb.
Henry and Mary also started a newspaper, The Voice of the Fugitive, in January, 1851. It was a very important means of communicating with Underground Railroad supporters, and with the general public. The Bibbs’ newspaper also provided information useful in the resettlement of former slaves and free Black Americans in the British colony of Canada West (Ontario). A network of agents in the U.S. and Canada collected from subscribers and sent the money to Henry and Mary so they could run the newspaper.

(There is more information about the Voice of the Fugitive on the next panel.)

In September 1851, the Bibbs called a conference to be held in Toronto to discuss whether or not Canada was the best place for African Americans to seek freedom. More than 50 delegates came to the North American Convention, also called “The Convention of Coloured Freemen.” Henry and Mary also worked with abolitionists from Michigan to purchase and distribute farmland in Essex County (near Windsor) to incoming freedom-seekers. The organization was called “The Refugee Home Society.”
Sadly, Henry Bibb died on August 1, 1854. He was only 39 years old. His funeral included a torch-lit parade of boats on the Detroit River as part of the Emancipation Day celebrations that weekend. Mary stayed in Windsor for a time, running her school and then a retail store selling women’s clothing and accessories. She married Isaac N. Cary, one of the family of important abolitionists in Toronto who had once lived in Southern Virginia and then in Cincinnati. In 1871, Mary moved to Brooklyn, New York, where she died in 1877.

- text from Henry and Mary Bibb

Henry Walton Bibb was an important figure in the anti-slavery movement in Canada. As well as publishing the newspaper and other works, he was the founding director of the Refugee Home Society in 1851. This Society aimed to help meet the needs of former slaves living in Canada.

Samuel R. Ward and Mary Ann Shadd Cary, who later published The Provincial Freeman, were very critical of the Society, because it bought land and created separate black settlements in Sandwich and Maidstone. Bibb felt that these settlements would provide better support systems for the new arrivals, and would also help preserve their identity and culture.

Shadd and Ringold, on the other hand, believed that African Americans should integrate into the local society. Shadd in particular felt that they must be independent and was strongly opposed to accepting any form of charity. They accused the Society of mismanagement and corruption.

In September 1851, Henry Bibb was also elected chairman of the North American Convention of Colored Freemen, and in October 1852, he became president of the Windsor Anti-Slavery Society. 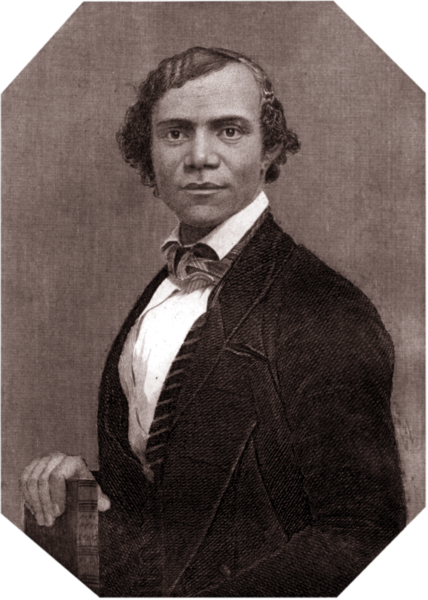 Henry Bibb. Portrait from his autobiography. Courtesy of Wikipedia. [Learn More]
Back to Exhibits → Previous → Next
Powered by / Alimenté par