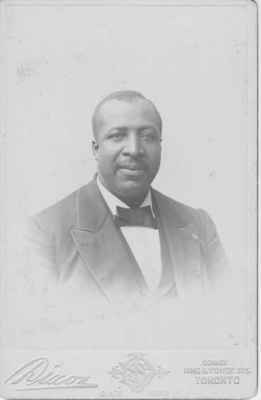 Born in 1815 or 1816 in Maryland, Richard and his family were enslaved. Richard's passion for religion and his natural tendency to sermonize caused some tension, especially drawing the anger of his white slaveowners. Around the age of 25, in 1840 or 1841, Richard was sold into the possession of a white man who did not appreciate his preaching, which he did regularly with his fellow slaves. Richard was put in jail - we're not sure what the charge was, but it was probably something about inciting his slave brethren to riot - and spent three months and eight days in jail before a previous owner bought him back and had him released for prison. This owner agreed that Richard should be made free, at the price of $400, which Richard should pay back through his own earning after his freedom led to paid employment. Richard agreed.

In 1843, as a free man for the first time in his life, Richard moved to Pennsylvania, then to Canada in 1845. He landed first in Toronto, and decided to move to the small black settlement of Oro, a town in need of a spiritual leader.

Richard Sorrick was able to tell his story firsthand in a book of similar accounts of escaped slaves who settled in Canada. The book is by Benjamin Drew (1812-1903), was published in 1856, and is called:

A North-Side View of Slavery. The Refugee: or the Narratives of Fugitive Slaves in Canada. Related by Themselves, with an Account of the History and Condition of the Colored Population of Upper Canada

Richard Sorrick was interviewed by Mr. Drew and gave many of the details we now know about his life:

I was born in Maryland, Washington Co., two miles from the city. At a year old, I was sold with my parents, and lived in Hagerstown some years, and then sold back to my first master,--then he sold me to Mr. H. near Hagerstown. Then I was sold to Mr. M. I was then twenty-five years old. Mr. M. in 1841, put me in prison on the 16th of March for preaching the gospel to my colored brethren. I remained in the prison three months and eight days; then Mr. H. bought me back again. I must speak well of Mr. H., for he stood by me. I stopped with him more than a year after he redeemed me from the prison. Mr. H. remembered me in the prison.
It pleased the Lord to work a way through Mr. H., who believed I had a call to preach, to give me a chance for freedom, by offering me my liberty on condition I should earn and remit to him the sum of four hundred dollars. He gave me a pass and I went to Pennsylvania, in 1843, Oct. 11. Thence I remitted him a portion of the money. The balance I have never paid.
I came into Canada in 1845. Stopped at Toronto, where I found the colored people prompt, doing well, ready to help. I went to Oro, where I found some fifty persons settled; many comfortable and doing well, but many suffer a great deal from poverty. I showed them about agriculture, and instructed them as far as my limited learning would go. When I came away, many were poor, but they were not vicious: I never lived among a more teachable people. I never knew a fight among them or their children. The worst fault was, some tendency to slander each other: but they have been instructed by the missionaries to read and write.
On leaving Oro, I came on to the conference in Hamilton, where I have principally made it my home, since 1847,--although I have been absent a portion of the time in Canada East.
In regard to the colored people in Hamilton, I found them not in a very good condition, when I first came here, although some were wealthy. I never saw so much spirit consumed by the colored people as at that time, but most of those who were among the vicious, are dead and gone. Now the evil of drinking is comparatively slight, pretty much done away, and those who have come in within a few years, are generally well behaved and industrious. We have two respectable churches, in one of which I preach,--the A. M. Episcopal. My people come into this country with nothing, and they have to work for what they do get. One cannot expect a great deal at once from such people. Every thing is to be hoped for them,--but the main obstacle is a prejudice existing between colored and white.
Slavery is the worst system I have ever seen. Although I have been poor here, I can repeat, "give me liberty, or give me death." I have seen children at a month old taken from their mother's arms and sold. I have seen children sold from their parents and many separations of families, where the parties never could see each other again.

The Oro Settlement was formed when nine black veterans of the War of 1812 were offered land grants in the area between modern-day Barrie and Orillia. Richard Sorrick says that when he arrived, there were around 50 community members; other documents show this to be closer to 100.

In 1838, a preacher from Boston named Ari Raymond had come up to serve the community, giving services for both black and white people in his home near Oro. In 1848, just after Richard Sorrick left for Hamilton, Ari Raymond purchased one acre from resident Noah Morris (for the price of one British pound, or about $200 Canadian in today's money) upon which to build the church and leave space for a cemetery.

The one-room church was 24 by 36 feet, a log building made from local felled trees. It had four windows for light during the daytime, and a chimney to heat it in the winter. There were nine small pews inside and a short fence to separate the pulpit (the stage area) from the seating for the congregation.

One source says that:

Between 1845 and '47 the Reverend Richard Sorrick, a former slave and brilliant orator, took over. He found a number of the community members were doing well but a large number were having difficulties adapting to a life of farming. Although his knowledge in this area was limited he helped as best as he could. Then he departed for Hamilton, taking a large number of the settlers with him.

In 1851, Richard was in Hamilton with his wife, Jane. They appear in the 1851 census of Canada as both being 36 years old, and living on a half-acre of land on Hughson Street. We don't know what Jane's family name was, but we think she was born in Tennessee and was also a former slave. We don't know when Richard got married - did he bring his wife with him from America? Did he meet her in Hamilton, or in Oro? It's not recorded anywhere.

We have a picture of Richard Sorrick with his wife and a son who looks to be about 12 years old. The picture is described as being in the late 1840s, meaning their son would probably have been born sometime from 1835 to 1839. Richard Sorrick, his wife Jane, and their son, from around 1850. Courtesy the Orillia Public Library. [Learn More]

In the 1861 census of Canada, Richard Sorrick is 45, living on Emerald Street in Hamilton, and with his wife, but without any children:

- quoted in Towards a Meaning of Literacy: Literacy and Social Structure in Hamilton, Ontario, 1861

Does this sound right to you? Would their son have been old enough to move out on his own by this time? Or does "no children" mean something else in the census?

Remarkably, in 1861, Richard and Jane had another family member living with them: Richard's 77-year-old father, David. Somehow Richard had managed to get his enslaved father out of the States and out of slavery to Canada. Remember, this would have happened at least two years before President Abraham Lincoln announced freedom for slaves in southern states in 1863 with the Emancipation Proclamation, and during the most dangerous years to be black in those states - fugitive slave hunters would kidnap free people, whether they fit the description of escaped slaves or not. However Richard managed to accomplish the rescue of his elderly father, it must have been with the help of many friends and allies.

According to the same census, Richard could not read or write. Richard was considered a wonderful preacher, very skilled at oratory, and worked hard to help his parishioners with their challenging manual work farming the rough Oro land. While Richard was born into slavery, he was notably smart and inspirational, so much so that his former owner bought his freedom for him so that Richard could go on to work as a minister. Does it sound likely that Richard was illiterate? At the time, census-takers would go door to door and ask questions of residents found at each address, filling out the information on a sheet themselves - unlike today, as we each fill out a form ourselves either on paper or online. Can we be sure that Richard was unable to read or write?