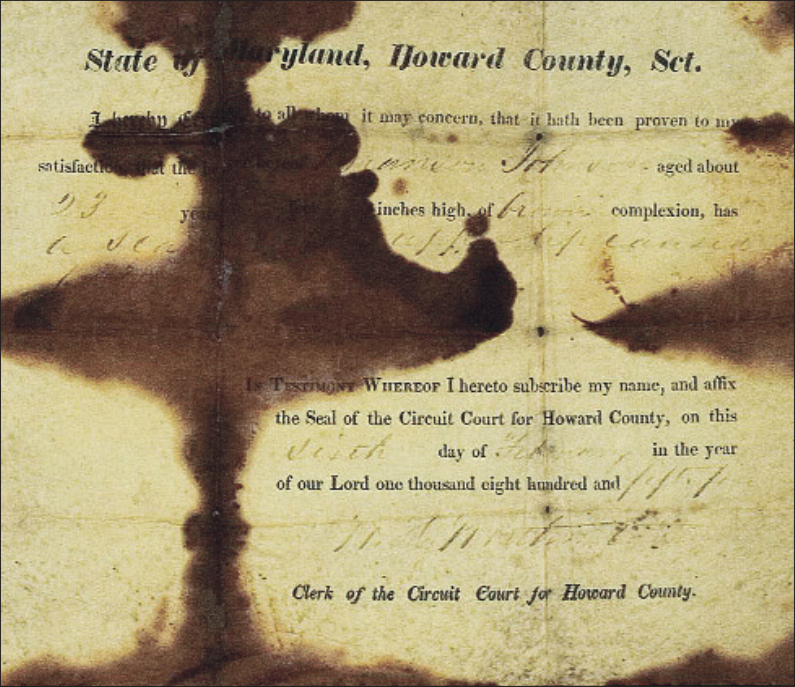 Branson Johnson was an immigrant to Ontario from the United States, where he was born free. He and his family arrived in the Oakville area in 1863, where some of his descendants still live.

A few years ago, his life made the news when it was discovered that his heirloom pocket watch, passed down in his family, contained a folded-up Freedom Certificate, issued in the United States to show that he was not enslaved. This documentation was provided to allow free black people unimpeded passage through places where it would be assumed he was an escaped slave.

Joe Johnson, a grandson of Branson who now lives in Indiana, was polishing the watch when it suddenly opened and the Certificate became visible. The family decided to donate it to the Oakville Museum, where Branson had decided to settle with his family over 100 years ago.

In Branson's certificate, it was noted that the 23-year-old was five-feet six-inches tall, of brown complexion and had “a scar over the upper lip caused by the bite of a dog.”

As these certificates were essential to ensure a person's freedom, they were kept on hand at all times and it was quite understandable, as well, that at the time they were often forged, stolen or borrowed by runaway slaves to be used to pass as free. Branson had apparently made sure his was always with him by carrying it in his pocket watch. It seems that there it stayed for almost a hundred years.

Through a little bit of archive work it was discovered that Branson Johnson, along with his older brother, Joshua, had registered their status as freeborn blacks. They both were issued Certificates of Freedom on Feb. 6, 1855 from the court in Howard County, Maryland where they were born. When Branson came to Oakville, therefore, he wasn't actually a slave on the run for his life and freedom, he was actually considered a “free man” in some northern states. Nevertheless he, his wife Amanda (Shipley) and three children, still followed the freedom trail north to Oakville in the 1860s, maybe even using the underground railroad and settled in Oakville in 1863 where a number of fleeing slaves did end up. At the time, there were about 58 African-Americans in the town, living among a population of 1,642 — about 30 per cent of the population of Oakville.

Branson had four more children here, was an active member of the American Methodist Episcopal (A.M.E.) Church and lived a block west of the church on what is now Lakeshore Road. The church now houses antiques, which is a testament to the changing demographics of the town. After working for a number of years on a train run between Toronto and Detroit, where he was a porter or cook, Branson died on Feb. 21, 1905 at age 79, and the watch ended up in his son Oliver (Ollie) Johnson's possession.

Joe Johnson, Ollie’s son and Branson’s grandson, glued the document he found onto a cardboard backing and kept it in a photo album for a number of years until he decided to offer it to Oakville in the summer of 2008 and stirred up a tornado of interest. Museum Curator Carolyn Cross said they were quite surprised by the call. “It was an amazing thing to see the document and hear Joe's stories, and hear a little of the family history.”