Raymond Moriyama and Bruce Kuwabara have very similar biographies, but as architects their aesthetic styles are completely unique.

Raymond Moriyama was born in 1929 in Vancouver and had firsthand experience of internment camps during WWII. After the war, his family moved to Hamilton, Ontario, and he attended high school there and worked in a pottery factory. He studied architecture at the University of Toronto, graduating in 1954, and got his masters degree from McGill University in Montreal. He worked for a number of firms before starting Moriyama & Teshima Architects.

Bruce Kuwabara was born in 1949 in Hamilton, to a father that had been interned in Ontario during World War II. After a childhood in downtown Hamilton and studying architecture at the University of Toronto, graduating in 1972, Bruce founded the architecture firm KPMB (Kuwabara Payne McKenna Blumberg) in Toronto.

Some of the most notable buildings designed by Raymond:

Raymond Moriyama spoke of his family's history and the way that internment impacted his life and career in a speech when he accepted the Sakura Award, for contributions to Japanese culture in Canada and abroad:

Father was sent to a POW camp in Ontario for resisting the government’s contradictory action of going to war to preserve democracy and individual rights while, at home, disregarding the rights of 22,000 citizens. Mother, who was pregnant, in despair and having to face a future with three children and $34.92 in savings after 13 years of struggle in Canada, lost the baby: the only brother I could have had. In the B.C. camp, I was mocked in the public bath by fellow Japanese-Canadians calling my scars [from childhood burns] a contagious disease.

I was disowned by my country and mocked by my own community. My father was a POW in faraway Ontario, and my self-esteem was destroyed. In despair, I decided to bathe in the Slocan River on the other side of a little mountain away from the camp. The water was glacial, but it was better than hot tears. To see who might be coming, I built an observation platform. Soon I found myself wanting to build my first architectural project, a tree house, without being found out by the RCMP. I used just an axe as a hammer, an old borrowed saw, six spikes, some nails, a rope, and mostly branches and scraps from the lumberyard. It was hard work building it by myself, and it was a lesson in economy of material and means.

That tree house, when finished, was beautiful. It was my university, my place of solace, a place to think and learn. This is when I first learned to listen to the Earth. The view, and sound, of nature from the tree house was astonishing: the mountains green and silver; the sunrise, the sunset; the whisper of the river and the sound of the wind. I was learning the true meaning of dynamic permanence of temporariness – that the “frightening” storm was a part of a balance to the beautiful sunset and that it was less vengeful than man’s irrational thoughts and deeds.

I was amazed that my despair was subsiding. I began to understand that I could not hate my community and my country, or my hate could crush my own heart and imagination. I replaced the despair with ideas about what I could do as an architect to help my community and Canada. The inspiration for the Canadian War Museum came during this period, at age 12 and 13: the sound of nature and the evening breeze I heard in the tree house coming fully alive 60 years later. The Canadian Embassy in Tokyo is a tree house inspired by the original. 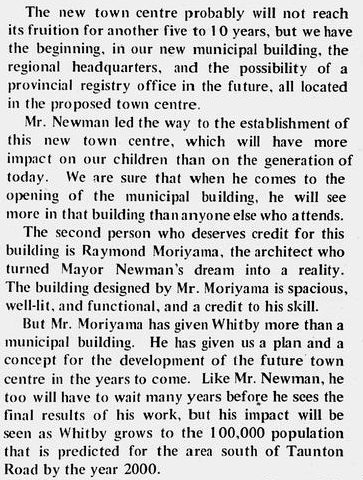 Excerpt of an article about Moriyama's work in the Whitby Free Press, 1977. [Learn More] 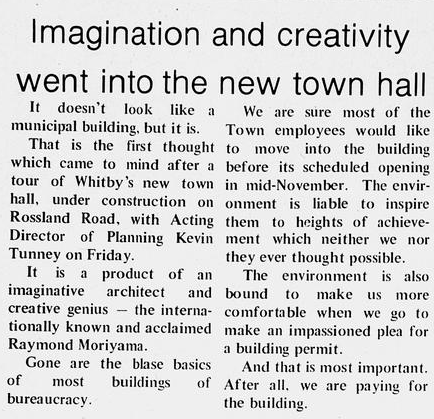 Branch Head Barbara Kho with Raymond Moriyama during construction of the new Burnhamthorpe District Library in 1976. Courtesy the Mississauga Library System. [Learn More]
Back to Exhibits → Previous → Next
Powered by / Alimenté par