The Voice of the Fugitive was one of the first black newspapers in Upper Canada that was aimed at fugitive and escaped slaves from the United States. The only earlier paper was the British American (Toronto), which began in March 1845, but seems to have only lasted a short while. No copies are known to have survived.

Voice of the Fugitive was edited and published by Henry Walton Bibb, who was born into slavery in Kentucky in 1815. He escaped to Sandwich, Canada West, in 1850, after the passage of the Fugitive Slave Act by the American Congress.

In his introduction (January 1st, 1851, page 2), he writes: “We shall advocate the immediate and unconditional abolition of chattel slavery everywhere, but especially on American soil. We shall also persuade, as far as it may be practicable every oppressed person of color in the United States to settle in Canada.”

Entire pages were dedicated to the question of Canadian colonization - the reasons why, and how best to approach it. Contributor "J. T. H." was particularly for the creation of a centralized black government in Canada, from which could be directed ongoing emancipation and settlement efforts.

As well as news of events in the U.S. relating to slavery and slaves trying to escape, there were also articles on how the refugees were faring in Canada, and about organizations and individuals who were helping them. Other favourite topics were temperance, religion, education, and agriculture.

Voice of the Fugitive began publication on January 1st, 1851 in Sandwich, Canada West. It was a 4 page newspaper, published bi-weekly on Wednesdays. It cost $1/year in advance and was available across Upper Canada, as well as in many U.S. states, e.g. Michigan, Ohio, New York, Pennsylvania, and New Hampshire.

In April 1852, the offices were moved to Windsor and in June of that year, James Theodore Holly became the assistant editor. This freed up Henry Bibb to pursue additional political and charitable activities, speaking engagements, and other forms of writing.

In January 1853, the newspaper added “Canadian Independent” to its name, increased in size, and became a weekly publication. This appears to be despite the constant financial struggles to keep it afloat. On the night of October 9th, 1853, the offices of the newspaper were burned to the ground. However, by November the Voice was publishing once again. “We observe that it has come forth from the fire, phoenix-like, and vastly improved.” (Globe, 1853: November 4th, page 2). Henry Bibb continued to publish Voice of the Fugitive until his untimely death on August 1st, 1854.

"In What Country Shall We Settle?" - a column contributed by G. Washington to the Voice of the Fugitive. Courtesy the INK Project. [Learn More] 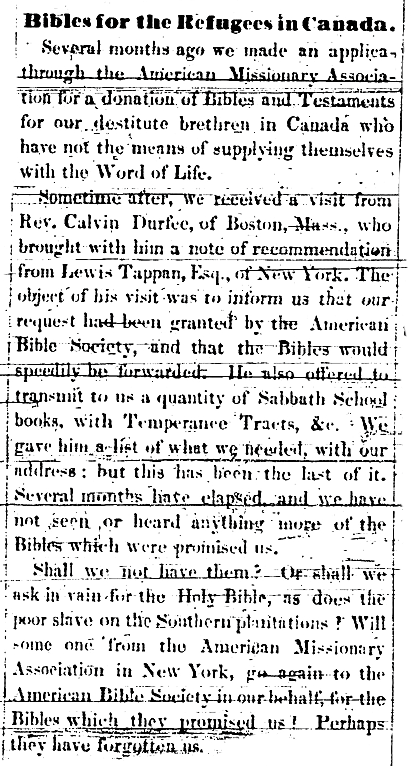 "Bibles For The Refugees in Canada," from August 13th, 1851. [Learn More]
Back to Exhibits → Previous → Next
Powered by / Alimenté par