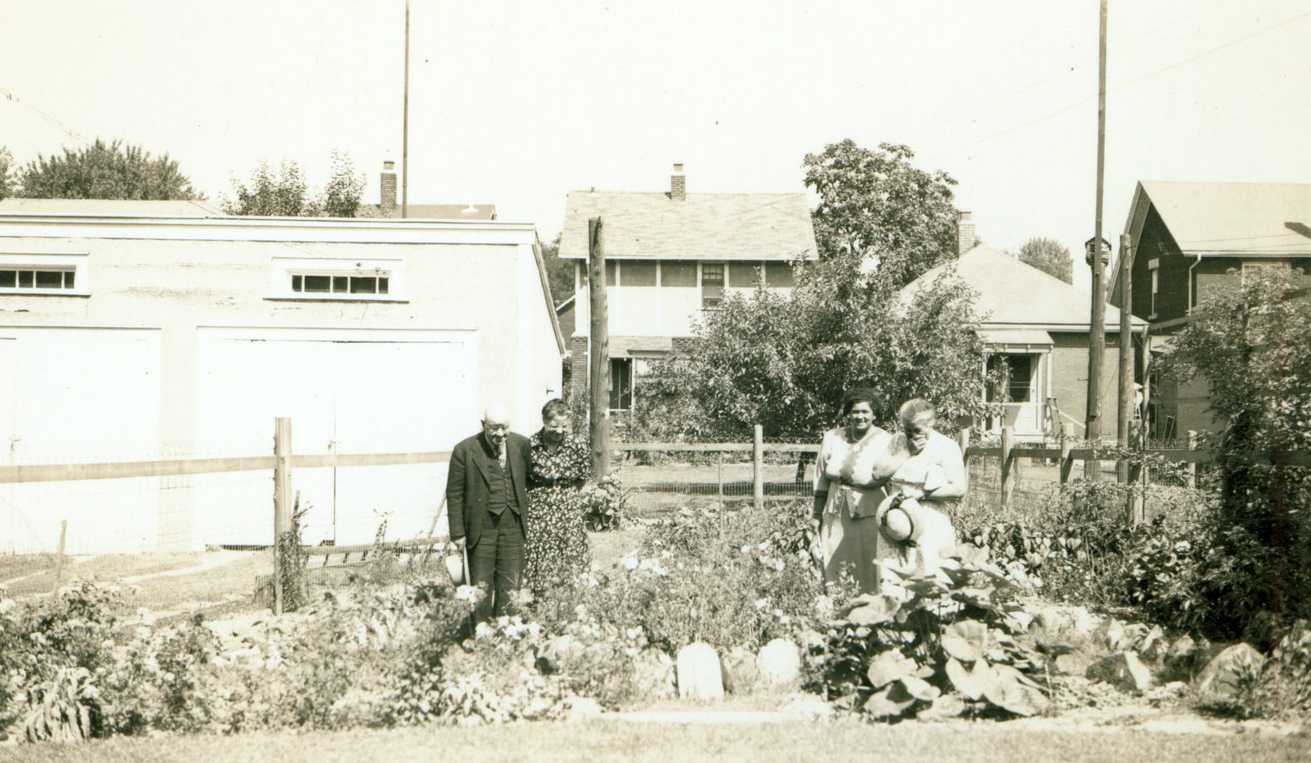 Albert and Josie Sloman (at left) with their daughter, Iris Sloman Bell (third from left) and an unidentified woman in a vegetable garden. Courtesy the Brock University Archives. [Learn More]

Life in Ontario after 1900 continued to be a fight for civil rights. Up until the 1960s, when globalization and technology changed immigration across the entire world, the vast majority of black Canadians were descendants of African Americans or first-generation immigrants from the United States.

As time went on, black Ontarians were able to secure better rights and freedoms, as well as change the opinions of white settlers about things like segregation and integration. But that path was not without pain, strife, and struggle against racism, close-mindedness, and fear of the unknown.

Throughout the 20th century and all of its uncertainty, black Ontarians prospered and maintained a strong sense of community and solidarity.

Across Canada, black Canadians worked for acceptance and respect. A group from Edmonton enlisted in World War I and became the first black battalion; others worked at home to support the war effort through fundraising and volunteering. In World War II, black soldiers were allowed to integrate more into different service positions, and black support at home led black workers having access to labour unions for the first time. As a result, Ontario passed the first provincial Act against racial discrimination in 1944. It prohibited any signs or publications that expressed discriminatory messages.

In 1946, Viola Desmond protested racial segregation in Nova Scotia by sitting in the "whites only" section of a movie theatre. She was jailed and fined.

In 1947, Hugh Burnette, a WWII veteran, and a friend of his were refused service in restaurants in Dresden, Ontario. Burnette founded the National Unity Association in response, and they were able to convince the town council to pass an equality bylaw in 1947. Still, by 1954, the same restaurants continued to refuse to serve black people, even after Ontario had passed anti-discrimination laws covering housing and employment. a newspaper sent an undercover crew to investigate and reported on the discrimination. The story made national news and resulted in protests. Following coverage included a documentary film that presents citizen opinions from Dresden and debates the issue of segregation in the town.

A law was passed to remove racial discrimination from immigration policy in 1962; Canada's first black Member of Provincial Parliament, Leonard Braithwaite, was elected in 1963; Prime Minister Trudeau began to move Canada's national identity towards a multicultural one in 1971. Still, racial tensions sometimes reached dangerous heights. In 1965, Amherstburg, Ontario, saw Ku Klux Klan violence and vandalism, including a burning cross and graffiti on the Black Baptist Church.

In 1985, Lincoln Alexander, born of West Indian immigrant parents, was sworn in as Ontario's lieutenant-governor. He was the first Black person to hold this vice-regal position in Canada. Alexander was also the first Black MP and federal Cabinet minister.

There are many more accomplishments and events involving black Ontarians in the 20th century, but these show the tension between achievement and oppression that the black communities continued to face decade after decade.