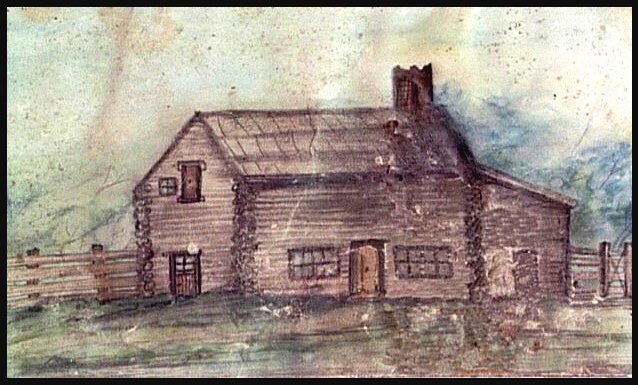 This sketch of the log house of William Riley is the only extant image of an early home built by a former slave in the town of Niagara's "coloured village", roughly the area bounded by King, William, Ann and Butler streets.

The sketch was donated to the museum by Mary Ann Guillen, Mr. Riley's daughter, who was Janet Carnochan's major source of information about the town's 19th century black community. The drawing was done for Mrs. Guillen by a female acquaintance, shortly before the squared timber building was pulled down in the 1880s.

William Riley, an escaped slave from Fredericksburg, Virginia, bought the one acre town lot, 276, at the corner of Mary and Victoria streets, from William Dickson for £50 in 1819, becoming the third black man to own property in the village. The price was fair for land in the area. However, one does wonder why Mr. Dickson paid only five shillings for it a short time earlier. Neither transaction was registered until 1886.