Mary Ann Shadd was encouraged by Henry Bibb, owner and editor of the Voice Of The Fugitive, to move to Windsor from Delaware and started a school.

Henry Bibb and Mary Ann Shadd held many beliefs in common but disagreed on many points. These ideological differences and personal animosities led to her decision to start The Provincial Freeman, a newspaper that would reflect her own views of the situation in Canada West.

The first issue of the Provincial Freeman was published in Windsor on March 24th, 1853. It was intended as a prototype, to be used to solicit financial support for a new weekly newspaper which would present alternative viewpoints to the Voice Of The Fugitive. Although Samuel R. Ward and Alexander McArthur were nominally listed as the editors, it was Mary Ann Shadd Cary who was the driving force behind the Provincial Freeman.

The Provincial Freeman was the second newspaper founded specifically to give voice to the concerns of the black community in Canada, as well as those in America who were not at liberty to speak out in their own communities. Editor Shadd Cary wrote plenty of her own passionate editorials and persuasive arguments, but she also published a wide variety of reports and letters from over the border. See for example this letter sent to the Provincial Freeman from a contributor in Philadelphia, William Still, transcribed by Scott W. Williams. It was printed in the May 6th 1854 edition of the paper.

By March 25th, 1854, Shadd had secured enough financial backing and subscriptions to continue publishing. The 4 page paper now appeared in Toronto, with “Self-reliance is the true road to independence” as its motto. It was distributed throughout Canada West and the northern U.S. states. As well as articles on abolition, racism, emigration to Canada, temperance, education, and women’s rights, there were many other international news stories, fiction, letters from readers, and advertisements. After Henry Bibb’s death in August 1854, The Provincial Freeman became the preeminent black newspaper in Canada West. Shadd’s editorial style tended to be blunt and abrasive; she was very critical of anyone, of any race, who disagreed with her views. Although she was very passionate, her lack of political astuteness, likely did not help subscribership.

Initially, Shadd hid her gender, usually signing off as M. A. Shadd, Publishing Agent. However, eventually it was revealed that she was a woman, and that she was running the newspaper. Due to the gender prejudice of the times, and concerned about the economic repercussions for the paper, she felt obliged to hire a “gentleman editor”, William P. Newman. He became the public editorial face, but she continued to be involved behind the scenes.

Like most small nineteenth century newspapers, the Provincial Freeman was constantly experiencing financial difficulties. In the summer of 1855, Shadd made the decision to move the paper to Chatham, a thriving town with a growing black population. Her own parents had moved nearby, and her brother Isaac became the official publisher. The newspaper continued to appear for about another 5 years.

We've lost many of the issues of the Provincial Freeman, and therefore cannot be sure when it stopped printing. It probably stopped in spring of 1860, judging from when advertisements for the paper stopped being run in other publications. The last issue we still have access to today is June 18th, 1859. 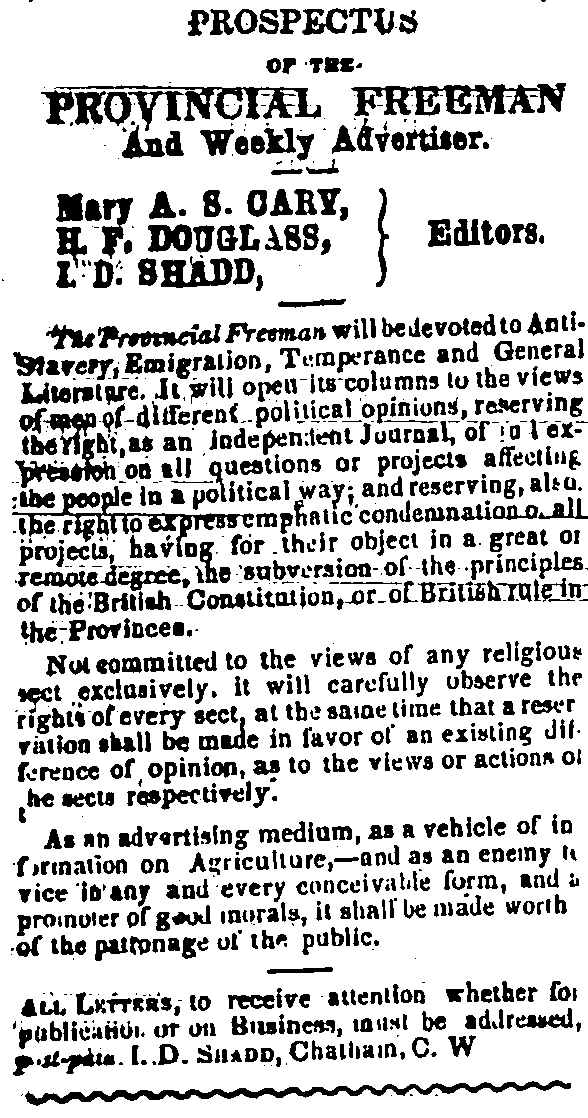 The prospectus from the Provincial Freeman in 1857, describing the paper's mandate and staff. Courtesy the INK Project. [Learn More] 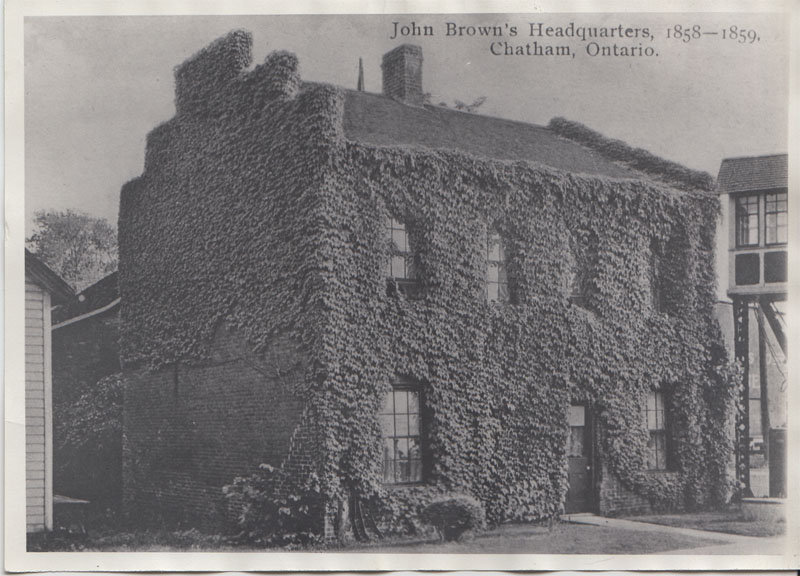 Home of "The Provincial Freeman" from 1854-1863. Courtesy the Chatham-Kent Museum. [Learn More]
Back to Exhibits → Previous → Next
Powered by / Alimenté par