Women's Institutes are an international success that originally started here in Ontario, spreading across Canada and then the world.

In 1897, the Women's Institute was founded in Stoney Creek, Ontario, just outside Hamilton, as an auxiliary to the Farmer's Institute, and had grown enough to become the Federated Women's Institutes of Ontario in 1919. Over 100 years later, the FWIO have 270 branches across the province with over 3,500 dedicated members.

The Women's Institutes were originally created "to improve women’s skills in the art of homemaking and childcare." Now the groups' focus ranges from public health, environmental stewardship, community welfare, and political advocacy to personal growth. The Women's Institutes have always been non-denominational and non-partisan.

One of their most famous projects are the Tweedsmuir Community History Collections, an Ontario-wide series of documents keeping record of local history. These books include news clippings, handwritten reports, oral history transcripts, photos, and documents from each FWIO branch's community.

These scrapbooks and hand- and typewritten accounts cover farms, industries, early settlers, veterans, anniversaries, schools, churches. The newer books are primarily newspaper clippings but the earliest books contain a lot of historical research as well as contemporary documentation. Taken all together, they are a remarkable resource for telling us about the everyday lives of women in decades when career opportunities were less available and women more often participated in community, church, and charity activities as part of their daily routines. They fill a large gap in the historical record where politics, business, manufacturing, farming, and scholarship were primarily performed by men - and they do the important work of collecting stories and memories from elders in communities that otherwise have no documented history.

You can browse a collection of digitized Tweedsmuirs from across the province here. 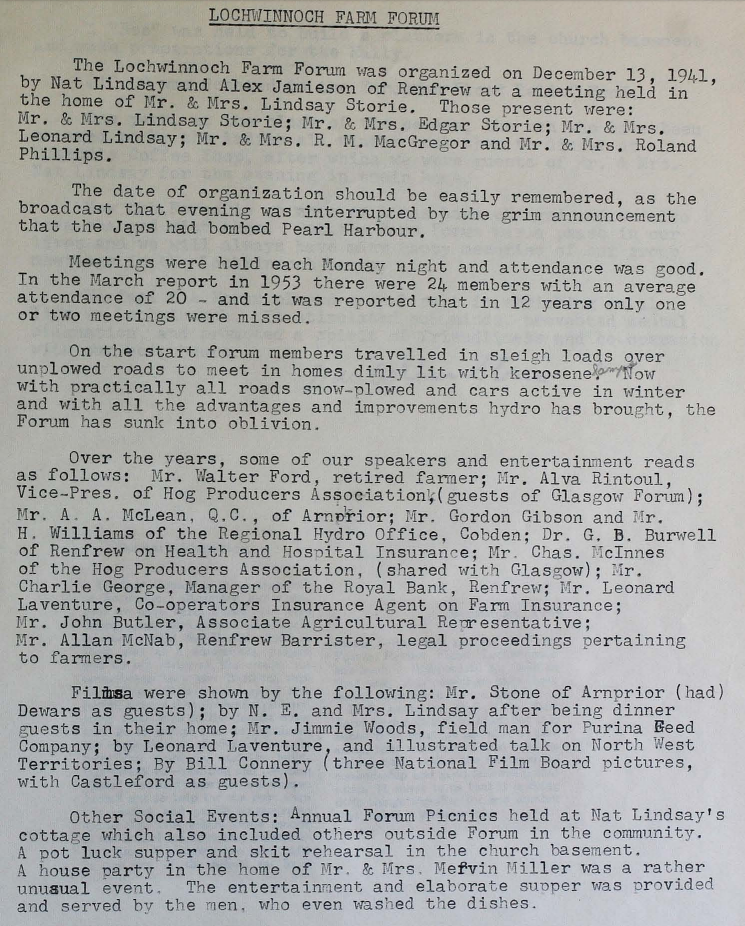 Adelaide Hoodless founded the first Women's Institute with Erland and Janet Lee. Adelaide's activism is founded by a very personal history: her interest in educating women stemmed from the loss of her son in 1889, who passed away after drinking contaminated milk. Adelaide was impassioned about making sure women knew enough to responsibly manage their households - this meant science, finance, and manual skills, practical knowledge useful from day to day.

Adelaide embarked on a speaking tour and so impressed an audience member in Guelph - Erland Lee - that he invited her to speak at his Farmers' Institute meeting outside of Hamilton shortly after. In 1897, her speech about creating a similar group for women impressed the attendees so much that Erland and his wife Janet were able to gather a group of 101 women and girls the next week, for the very first Women's Institute meeting.

Their constitution stresses the need for "scientific care of children" and "home sanitation," "with a view to raising the general standard of health of our people." Six focus areas were identified: "domestic economy," home architecture, physical health, agriculture, music and art, and literature and learning. Adelaide continued her speaking career and successfully campaigned to have more domestic duties taught in schools; meanwhile, the Women's Institute flourished under the influence of the Lees and grew rapidly to many chapters. There were 33 branches with 1600 total members by 1900; there were 400 branches by 1907, a decade after founding.

Care of children remained a large part of the WI work, alongside their focus on women's education. WI branches provided dental and health care in schools as well as meals, and continuing to improve and affect local curricula. In the 1920s the WI began publishing bulletins with instructions, tips, recipes, and other useful information for homemakers. In the 1930s this endeavour morphed into Home & Country magazine, reporting on branch and chapter activities as well as advocacy opportunities and sharing knowledge across the province. 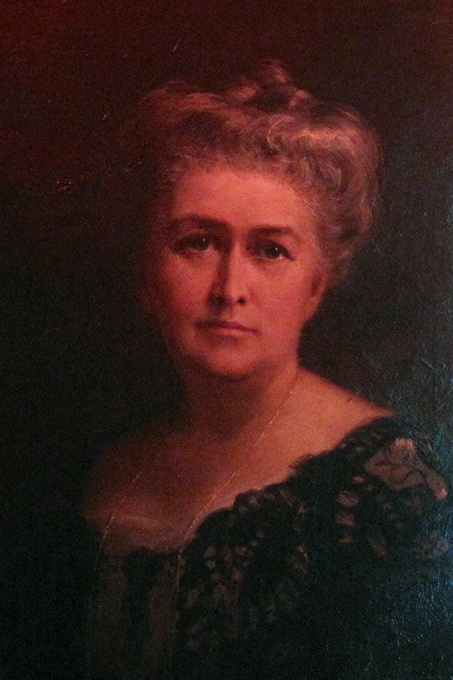 The FWIO became an official organization in 1919, the same year that the national Federated Women's Institutes of Canada was established to organize the other provinces' growing participation. By then, the FWIO had already become a force to be reckoned with during the First World War - raising funds, knitting socks, making preserves, sending care packages, supporting government fundraising, and running other campaigns to support the troops overseas. They repeated this feat in World War Two, raising a million dollars in 1940 alone, and sewing quilts for British refugees whose homes were destroyed by bombing.

The FWIO developed their Tweedsmuir History Books in the 1930s, after the president of the Hampstead chapter presented Governor General Lord Tweedsmuir with a leather-bound copy of “History of the Pioneers,” a record of the earliest settlers of North Easthope. Lady Tweedsmuir’s interest in preserving local history led her to honour her late husband: in 1945, she recommended that Women’s Institutes record local history in Ontario and across Canada. The campaign was launched in 1947 to celebrate the WI's 50th anniversary. 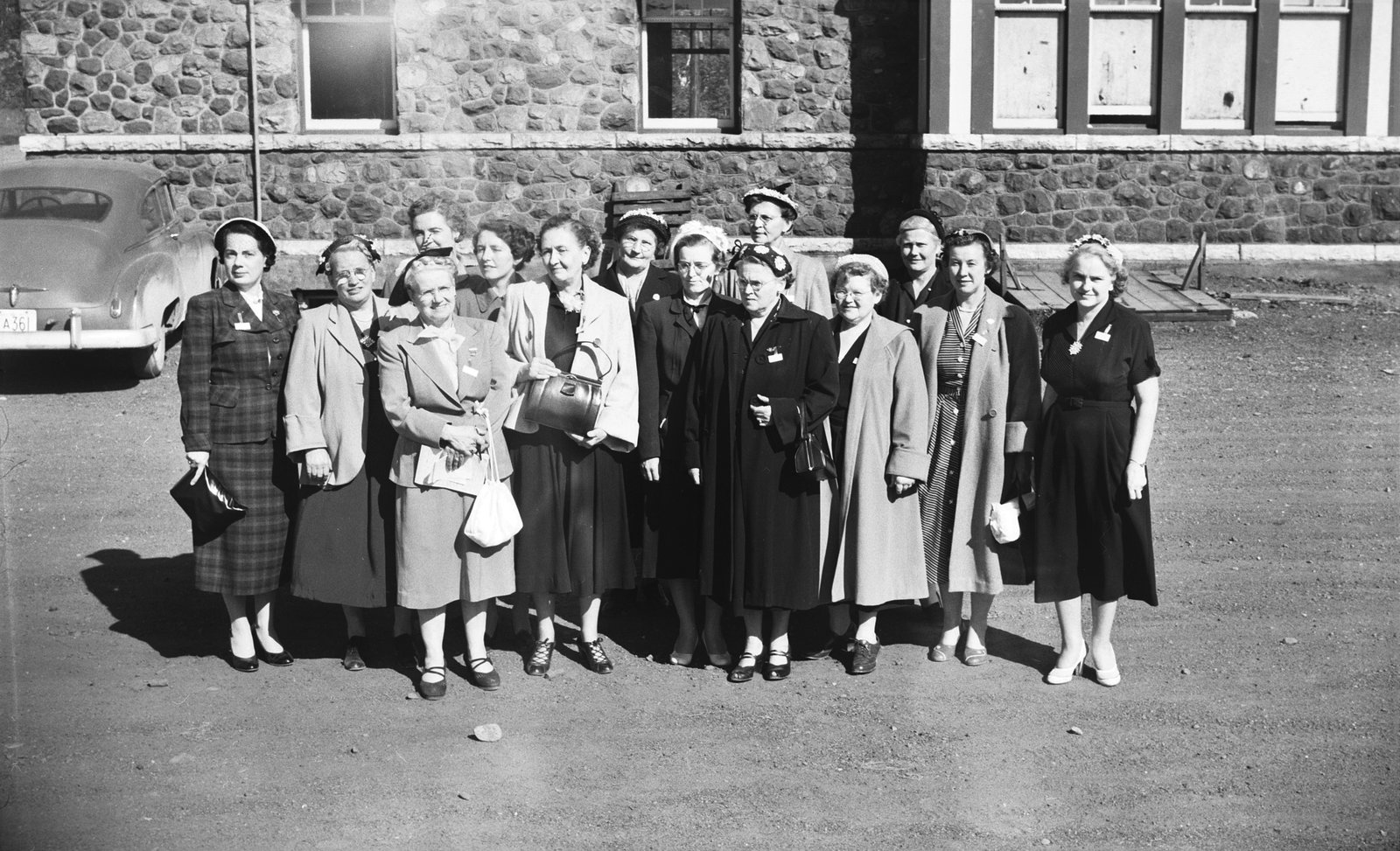 The Temagami WI in the 1950s.
Courtesy the Federated Women's Institutes of Ontario. [Learn More]

The FWIO hit its height in the 1950s, when 50,000 members belonged to over 1500 branches. As time went on, women's roles in society changed - especially after the Second World War, when women stayed in the workforce and hugely expanded the fight for gender equality. Currently there are 270 branches across the province with about 3,500 members - back to the WI's roots as a predominantly rural organization, but with mostly retired members and a renewed focus on local historykeeping. You can read more about the FWIO's accomplishments over the years and their current and upcoming activities on their website.

The Erland Lee Museum is in Stoney Creek, east of Hamilton, and is operated by the FWIO as a museum related to the Lee family and their lifestyle over the years. The Adelaide Hunter Hoodless Homestead is a National Historic Site near St George in the County of Brant, operated by the Federated Women's Institutes of Canada, and open by appointment. Some of the historical artifacts at the Adelaide Hunter Hoodless Homestead have been photographed and indexed online by the County of Brant Public Library, and you can see the collection here. 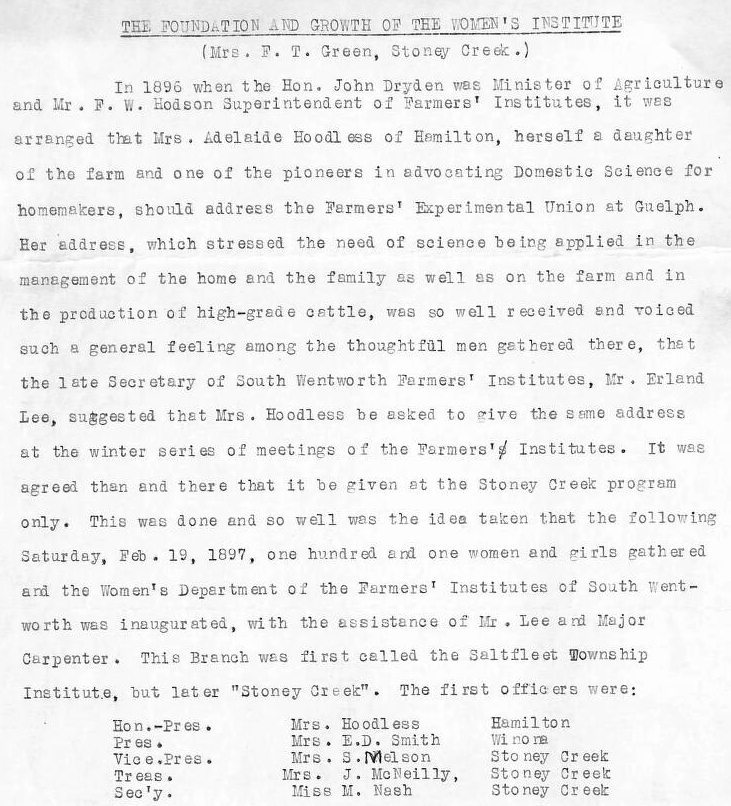 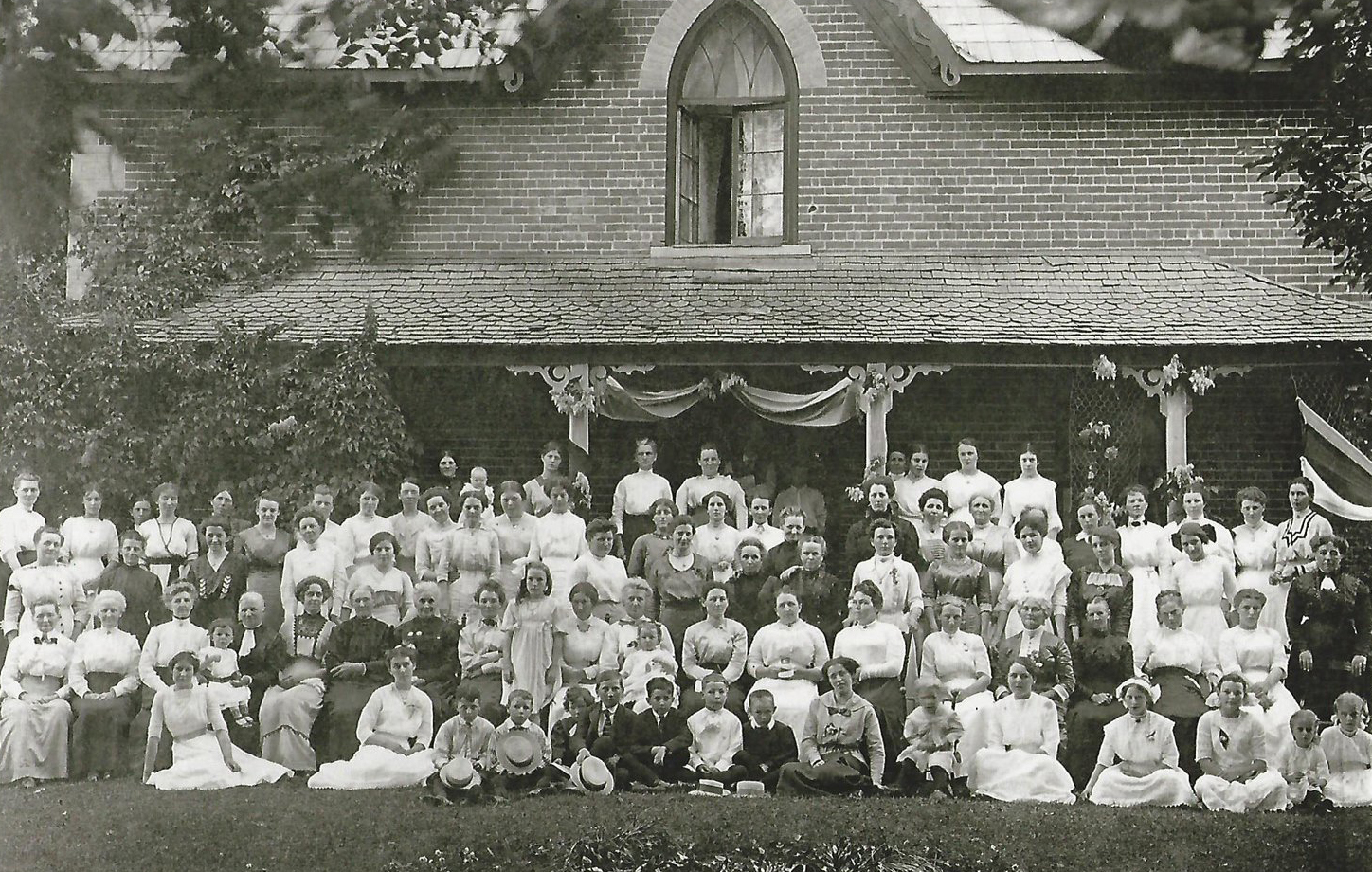 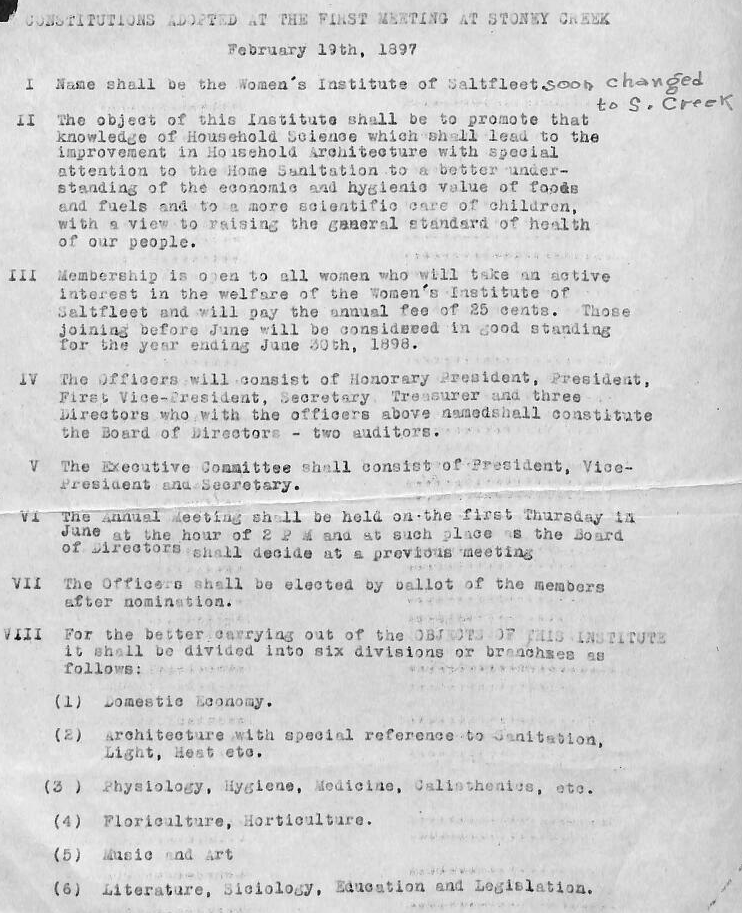 The Constitution as written at the first meeting in Stoney Creek. Courtesy the Federated Women's Institutes of Ontario. [Learn More] 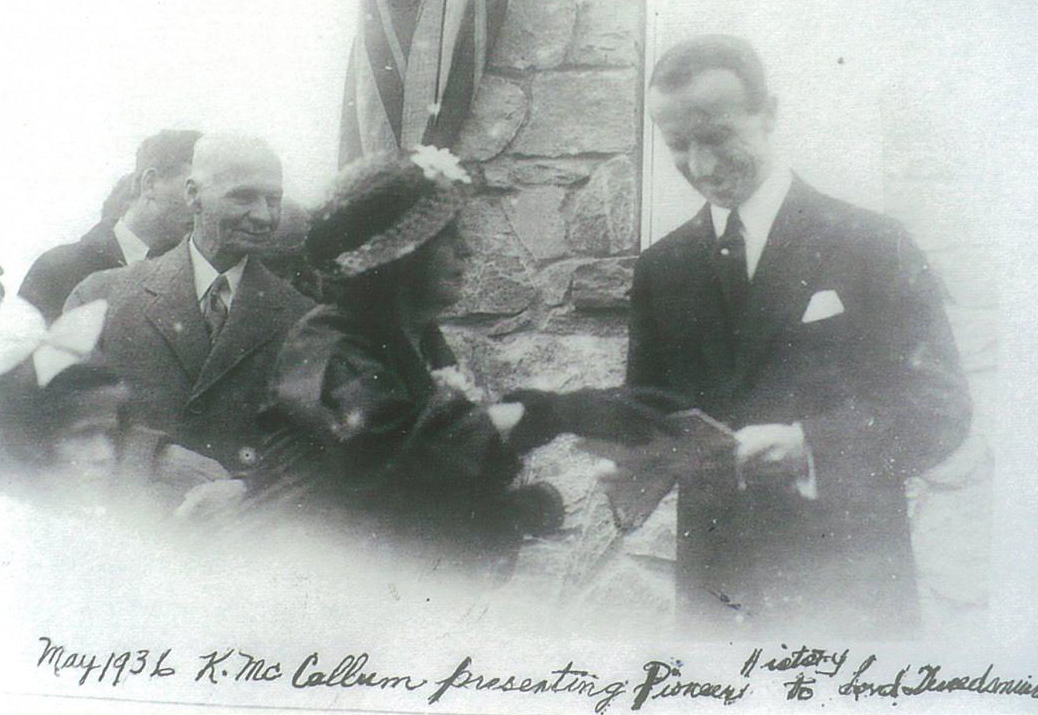 Hampstead Women’s Institute president passes the leather-bound copy of “History of the Pioneers” over to Lord Tweedsmuir May 28, 1936. Courtesy the Federated Women's Institutes of Ontario. [Learn More] 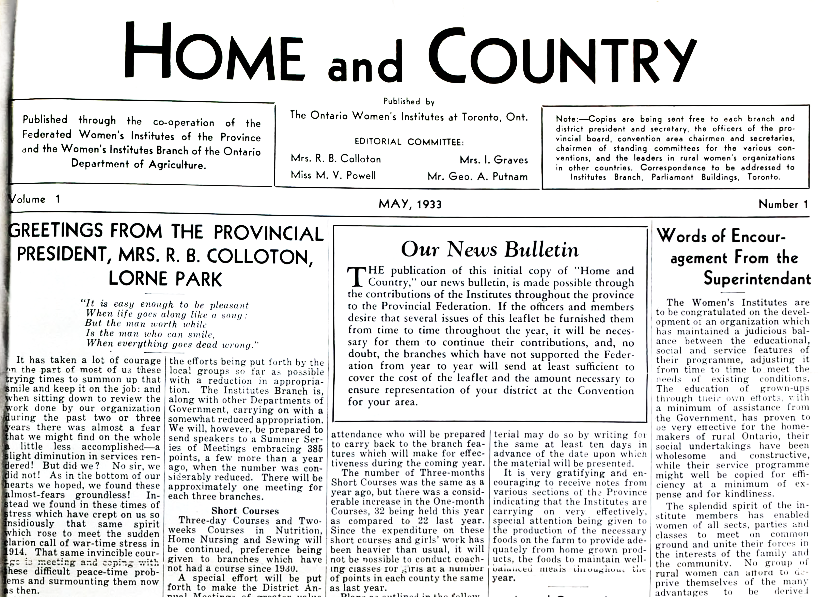 Volume 1, Issue 1 of Home & Country, 1933. Courtesy the Federated Women's Institutes of Ontario. [Learn More]
Back to Exhibits → Previous → Next
Powered by / Alimenté par